Sights and ideas for your own excursion in the principality

- Port shuttle: not available / not required

- Banks and ATMs: Mainly located in the district of La Condamine. 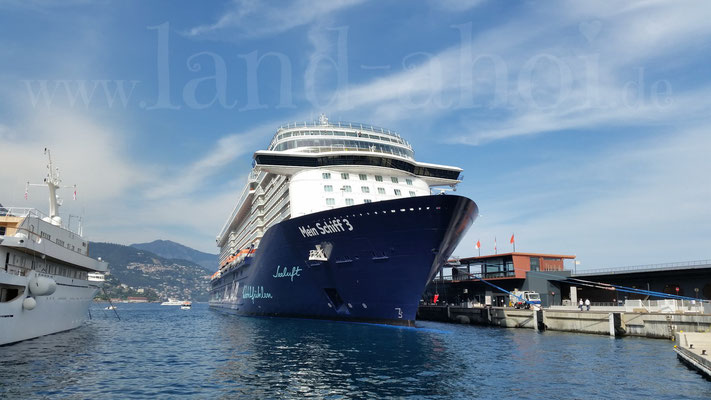 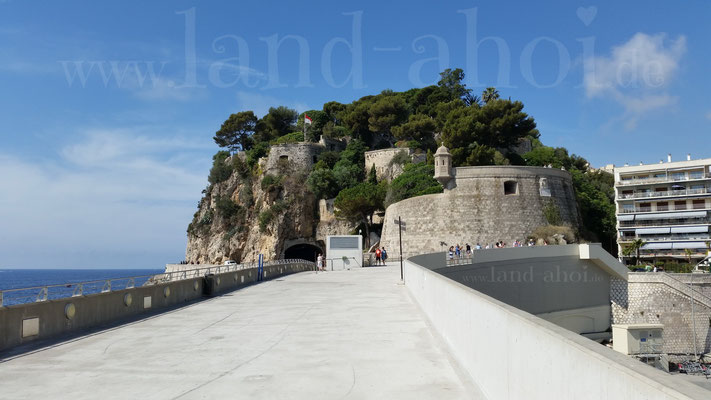 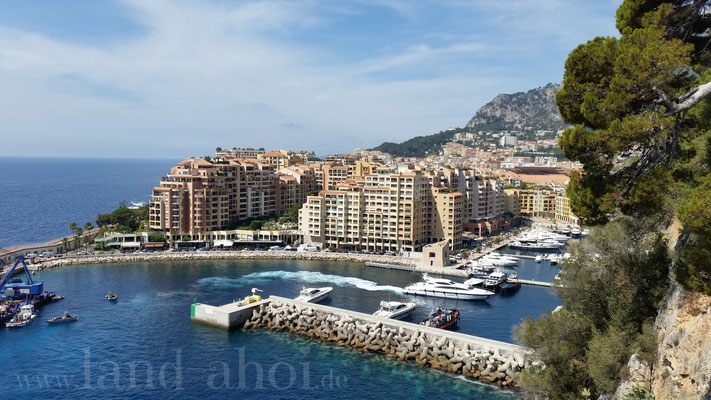 Normally a cruise ship docks at the pier Quai Rainier III. However, as there is limited space available there, it is also possible for ships to anchor on site and thus be at sea outside the city. In this case the guests are then brought ashore with tender boats. Often this causes delays in their own shore leave.

Monaco Le Grand Tour operates a Hop On Hop Off bus line with 12 stops. Upon arrival of a cruise ship, the operator will arrange a stop of its buses at the berth. From April to October, buses run every 15 minutes from 10:00-17:45. From November to March, the buses run from 10:00-17:30 and every 30 minutes.

The bus network in Monaco is served by 6 normal lines and one night bus line. The buses themselves are modern and air-conditioned. Every third bus of a line has a lowerable entrance. In line 5, every bus is equipped with it. Single tickets can be purchased directly from the bus driver or from the vending machines. The ticket machines are located at selected bus stops, understand several languages and allow the purchase of single, multiple and day tickets at reduced prices. The normal ticket is valid for 30 minutes and entitles the holder to one change to another line within this time. In this case it must be presented to the "new" bus driver. The tickets are validated on the bus at the electronic readers. Single tickets on the bus cost 2 euros (vending machine 1.50 euros). Multiple tickets cost 10 euros and entitle the bus driver to 6 trips (machine 11 euros for 12 trips). The day ticket valid for 24 hours costs 5.50 euros per person and is only available from the ticket machines. With this card you can use all buses as often as you like during this period. Children under 5 years of age do not need to buy a ticket.

Connected to the public transport system is the Bateau Bus, a small, purely electrically operated boat that takes its passengers across the harbour basin of Port Herkule in the La Condamine district. The harbour ferry runs daily from 08:00-19:50 between Quai Kennedy and the South Dam near the berths (Quai Rainier 1er) and can be used with the CAM tickets. So, a single trip directly at the pier costs 2 Euro and can be paid on the boat.

The old town of Monaco was built on the rock Le Rocher and borders directly on the berth Quai Rainier III. In the historic old town of Monaco-Ville, you will find the Oceanographic Museum, the Saint Nicholas Cathedral, the Palace of Justice and the Prince's Palace (Prince's Palace of the Grimaldis). There are also small cafés, restaurants and souvenir shops in this district.

The Oceanographic Museum (Musée Océanographique de Monaco) located on the Avenue Saint-Martin was founded in 1889 by Prince Albert I. The distance from the jetty is about 1.5 km by the traditional route. It is a 30-minute walk, and you can also pass the Prince's Palace, the Palace of Justice and the Cathedral. If one wants to save oneself the ascent and reach the Oceanographic Museum first, one can take a shortcut. This leads from the landing stage over a developed footpath alongside the sea. After approximately 400 metres, one gets to the parking place du Chemin des Pêcheurs. There, escalators and elevators lead up and one gets straight to the entrance of the museum, at the yellow submarine. The oceanography museum is open daily from 10:00-19:00.

Right next to the museum, the very beautiful park Jardins de Saint-Martin extends to the nearby cathedral. Some viewpoints offer excellent views of Monaco and the sea. Beside the plant world, one can also admire some sculptures of some artists.

The Saint Nicholas Cathedral (Cathedral Notre-Dame-Immaculée) is located very close to the museum at the 4 Rue Colonel Bellando de Castro. Built in 1875 in Romanesque-Byzantine style, Monaco Cathedral is the seat of the archbishop and houses the tombs of the Monegasque princely family Grimaldi. Free admission is granted daily from 08:30-18:00. In summer until 19:00 o'clock.

Right next to the cathedral is the Palace of Justice (Palais de Justice), opened in 1930. The impressive courthouse was only completed after 6 years of construction.

The Prince's Palace (Le Palais Princier) was built in 1215 by the Genoese. Parts of the palace are accessible as a museum and are open daily from 10:00-18:00 from April to October. In July and August until 19:00 o'clock. During the Formula 1 racing weekend and generally from November to March the palace is closed. For adults the entrance fee is 8 euros. Children between 8 and 14 years pay half. Every day at 11:55 am the spectacular changing of the palace guards (carabiniers) takes place. This takes about 20 minutes.

On the small marketplace Marche' de la Condamine at the foot of the old town, located at Place ď Armes, traders offer all kinds of fresh goods. In and around the square there are cafés, bars, souvenir shops, a children's playground and a small supermarket.

- Formula One and Swimming Pool

Directly at the harbour Port de Monaco (Port Hercule) in the district La Condamine there is the famous start and finish straight of the Formula 1 circuit. But on normal days there is not much to see at the Boulevard Albert I. Instead, there are all kinds of respectable yachts of any size on site. The Stade Nautique Rainier III swimming and outdoor pool is centrally located. The 25x50 meter large pool is filled with 27°C warm sea water. So, it can get a bit salty. The day ticket costs 5,60 Euro. Open in the season from the end of April to the beginning of October.

From the marina you can reach the adjacent Monte Carlo district via the Avenue ď Ostende. On the top of the hill, you will find the famous casino, the luxury Hotel de Paris and the Cafè de Paris on the Place du Casino. The opera of Monaco (Opèra de Monte-Carlo) is attached to the casino building. A little further on, over a few stairs and in front of the Fairmont Hotel, you reach the slowest hairpin curve of the Formula 1 worldwide.

The Japanese Garden (Jardin Japonais de Monaco) was laid out directly between the Mediterranean and Avenue Princesse Grace, according to the ideas of Princess Gracia Patrizia. Free entry is possible daily from 09:00-17:00. The park is like the whole city itself, very well maintained and invites you to relax.

Every day from 10:00-18:00, the Monaco Top Cars Collection is open to interested visitors. Among other things, vehicles from the private possession of Prince Rainier III are exhibited here. It is located at the 5, Terrasses de Fontvieille. The entrance fee is 6,50 Euro for adults. Children between 8 and 14 years pay 3.00 euros.

Opened in 1933, the Jardin Exotique de Monaco Botanical Garden was built on a steep slope and is located at 62, Boulevard du Jardin Exotique. Due to its location, it offers an excellent view of the principality. The botanical garden is open daily from 09:00 a.m. and closes between 5:00 and 7:00 p.m. depending on the season. For adults, the entrance fee is 7,20 Euro. Children and young people between 4 and 18 years pay 3.80 euros.

The Stade Louis II Stadium is the home stadium of the AS Monaco football club and seats 18,500 spectators. It was built in the Fontvieille district and opened in January 1985. A swimming pool and a multi-purpose hall with 3000 seats were also integrated into the structure. Under the stadium there is also a four-storey car park with 1700 parking spaces.

Monaco by helicopter is easily possible. A heliport with several landing sites in Fontvieille makes it possible. The local providers offer sightseeing flights, scheduled flights to Nice and privately bookable flights. For example, a ten-minute sightseeing flight over the city-state costs from 60 euros per person (flight with 4 guests). The airfare of 240 Euro is identical for 1-4 persons.

Through the tour and excursion providers GetYourGuide, Meine Landausflüge and Viator, you can book various excursions, activities, tours, tickets and admission tickets in Monaco, which are often offered at much lower prices than comparable excursions offered by the shipping companies. Thus, if you book in time, you can realize a variety of excursions on your own.

for, in and around Monaco,
we have compiled for you here.

If you have not yet booked a Mediterranean cruise, but would like to get to know Monaco personally and go on excursions on your own, you will find great offers from the major cruise operators in the German-speaking world. Aida, Costa and Tui Cruises - Mein Schiff offer attractive routes with their modern cruise ships, together with other interesting destinations. Book your next dream holiday directly with your favourite shipping company at fair conditions.

All ocean and river cruises can also be booked conveniently and inexpensively online with the sea travel specialist Kreuzfahrten-Zentrale Astoria. This means that you can choose from a wide range of up-to-date offers from various shipping companies. These include AIDA Cruises, Carnival, Celebrity Cruises, Costa Cruises, Cunard, Holland America Line, MSC Cruises, Norwegian Cruise Line, Royal Caribbean and TUI Cruises. Also attractive are the popular special offers, with which one can travel at a particularly low price and possibly also get a great bargain. 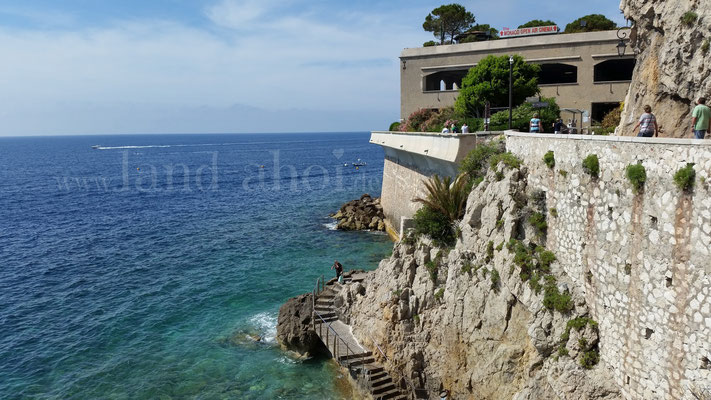 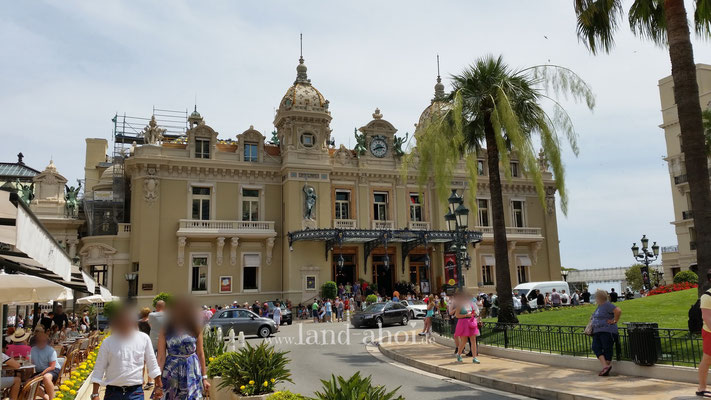 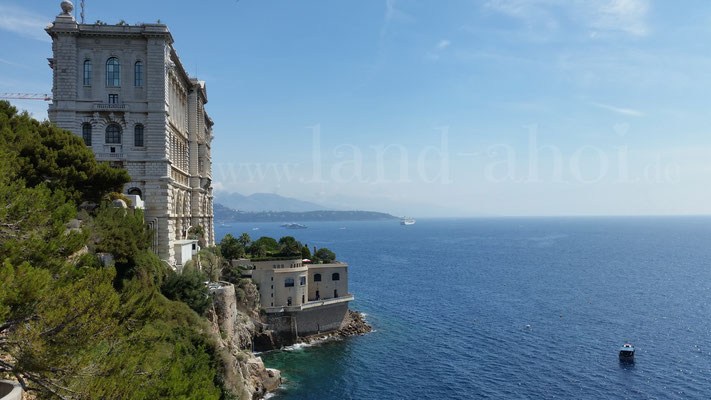 - Map of the city: Monaco Map