Sights and ideas for your own excursion on the Tejo

- Taxis: Usually available at the quay, costs to the city center (Praca do Comercio) about 5 €

- Trains: There is no central station or central bus station in Lisbon. The connections are spread over several stations.

- Car rental: Hertz, Rua Castilho 72 and at the airport

- Banks and ATMs: numerously spread throughout the city 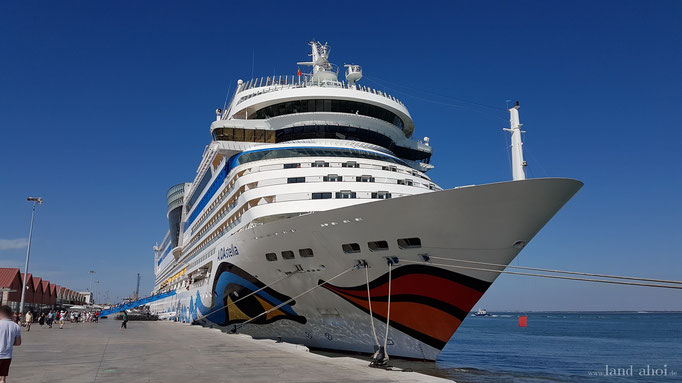 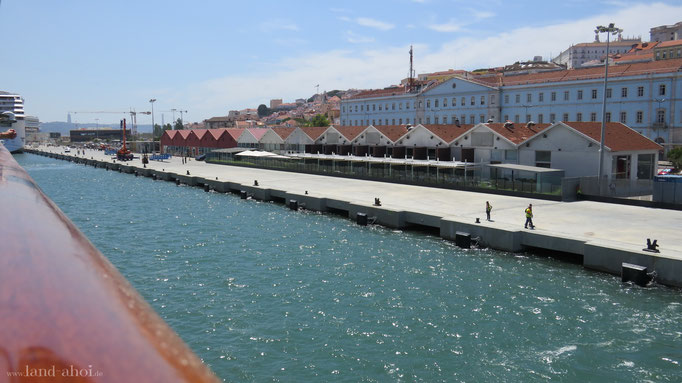 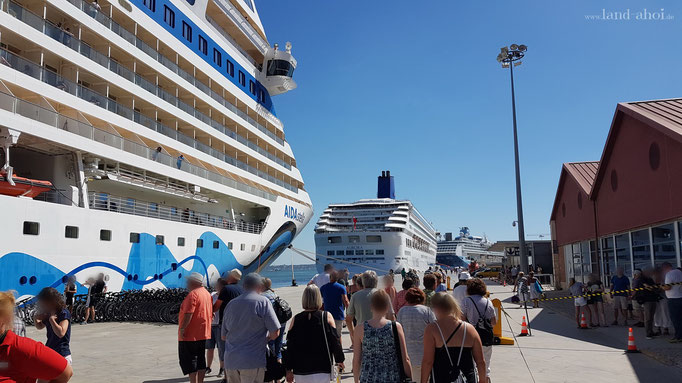 The Santa Apolónia pier is located right next to the homonymous train station, where the blue metro line also stops, and virtually at the gates of the medieval Alfama quarter. The Praca do Comercio square is about 1500 meters away.

The pier Alcántara is located very close to the bridge of April 25. In the nearby marina you can find restaurants, cafes and small stores. With the tramway line 15E you can reach the centrally located square Praca do Comercio in about 15 minutes. The distance is about 4000 meters. A cab to the fortress costs about 15 Euro.

The pier Jardim de Tobaco Quai is located centrally and directly between the two previous access points. The Praca do Comercio square is about 800 meters away.

At stops for several bus or tram lines, you should wave your arm once when the right vehicle approaches. Otherwise, the drivers only stop when someone wants to get off. In general, you are only allowed to get in at the front. Getting off at the back only. In Lisbon it is customary to queue up at the bus stops and get on one after the other.

The Metro in Lisbon is not numbered, but divided into 4 colours (blue, yellow, green and red line). To leave the platform you need the ticket. Metro network:

The Lisbon public transport system is somewhat fragmented. Not every ticket is valid everywhere. The public transport company Carris manages bus, tram, 3 funiculars and a vertical lift. The Metro is managed by EPE, Metropolitano de Lisboa. Transtejo/Soflusa has the ferries across the Tejo under its control.

Before you start your journey, you should make sure you have the right ticket with you. There are, for example, tickets that may only be used for the Metro. Single tickets can be bought at the ticket machines for currently 1,30 €, in combination with the 7 Colinas Card.  For the driver, the onboard tariff applies and is considerably more expensive (bus 1.85 € / tram 2.90 €). These are valid for one hour (bus/tram) from the time of validation. For the metro, a single ticket may only be used for one direction.

The 7 Colinas Card (costs 50 cents at vending machines in metro stations, counters, or at the airport post office) is a rechargeable zapping card, valid for 12 months. The card can be used to purchase all available tickets at a discount, which are paid for with the preloaded credit (€2-15). A bonus is available from 5 €. At the entrance of the bus and tram, there is a yellow device, which the 7 Colinas Card simply passes. A short beep and green light means successful payment. There are blue sensors at the turnstiles of the metro stations. The 7 Colinas Card can be used at Carris, EPE and Transtejo/Soflusa. At each machine, the remaining value of the card can be checked. It is only valid for one person. Children under 4 years of age, accompanied by an adult, travel free.

A 24-hour combi-ticket is quickly worthwhile if you want to explore Lisbon by public transport. It currently costs €6 per person and can also be loaded on to the 7 Colinas Card. But it is also available as a paper card. Can be used for bus, tram, and ferries from Transtejo.

The tram line 28E runs as a normal tram with old historical carriages through the old town of Lisbon, and is one of the most important sights of the city. For small money, you can get an impressive city tour. The line starts at the Largo Martim Moniz stop. If you take the tram from there, you will often get a seat, as the trams arrive empty. At the other stations, one has hardly any chance to get a seat, if one is able to ride at all. The line leads from the square Martim Moniz to Prazeres, to the station Campo Ourique and back again. All passengers have to get off at these final stops and, if necessary, can get on again a little further to start the return journey. Single tickets can be purchased from the driver and cost 2.90 euros per person. Depending on the traffic situation and in each direction, a journey time of 50 to 60 minutes can be expected for the entire route. Take care of your valuables. Pickpockets like to attack tourists in and around the trams. 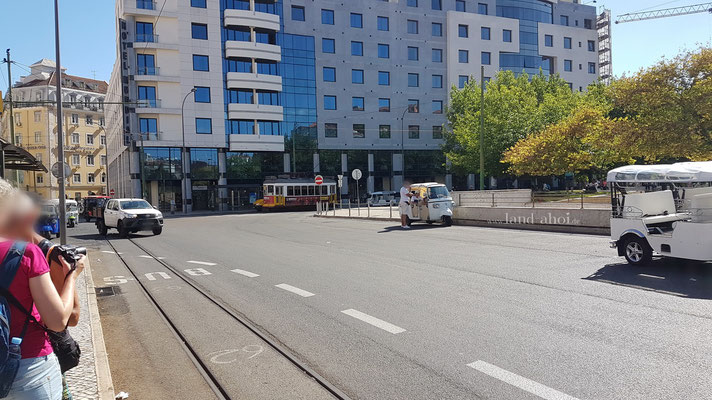 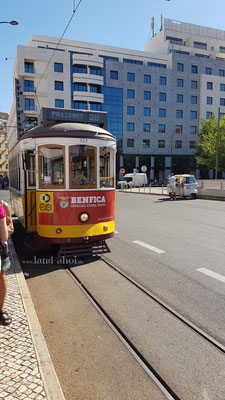 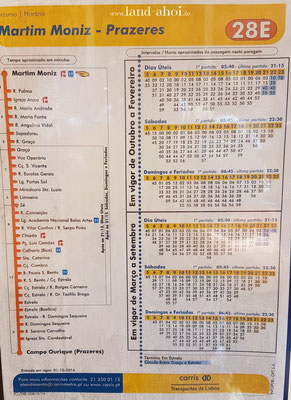 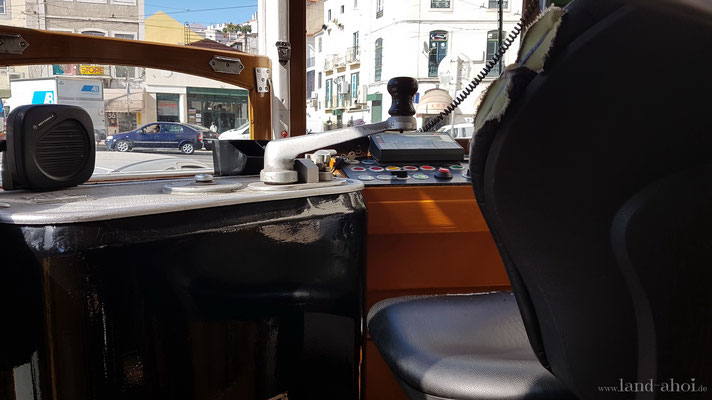 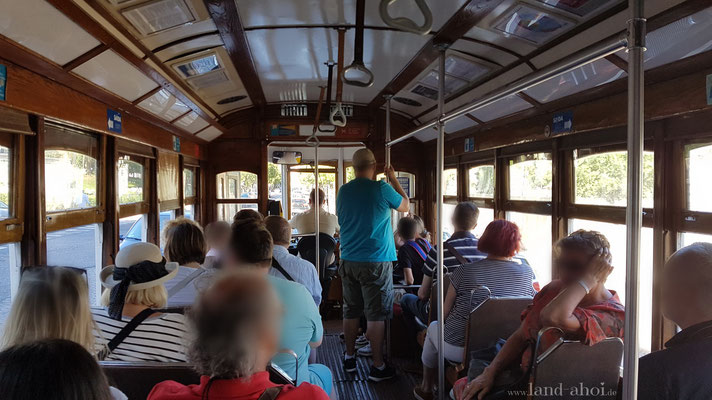 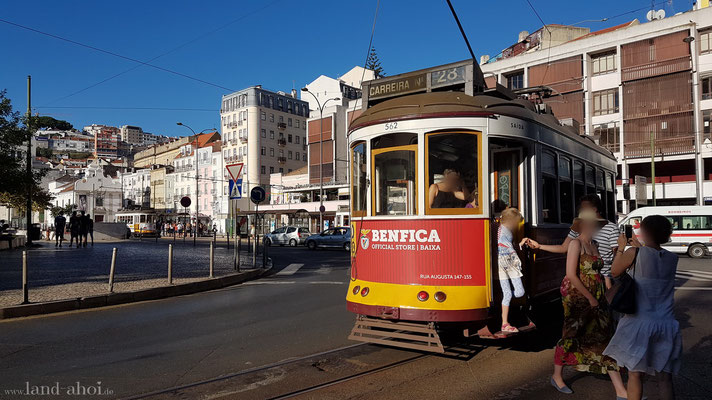 From Praca do Comercio, there are also two round trips on red historic trams. However, they are much more expensive than the regular urban railway. But for this, there is an audio guide in eight languages. There are also tours on mini-trains, which operate on the Hop On Hop Off principle. The same goes for the yellow Hop On Hop Off buses, which are a regular feature of the city. In addition, the sightseeing boats for tours on the Tejo start from the neighbouring ferry terminal Terreiro do Paço. The metro station of the same name can also be found there.

Stops of the Hop On Hop Off buses are located near the moorings. The well-known red buses of City Sightseeing run two different routes. The blue (April - October from 09:45-18:45) and the red (April - October from 09:30-19:00) line. Both lines meet at Praca do Comercio. The starting point is at Marques do Pombal. Each round lasts 90 minutes. The blue line has 15 stops, the red line 9. The ticket is valid for 24 hours and you can use it for both lines. In addition, the operator Yellow Bus Tours - Lisbon offers other interesting tours by bus, tram or boat.

The best way to get to Cristo Rei, the 110-metre-high Christ-figure on the south bank, is by ferry from Cais de Sodre to Cacilhas across the Tejo River. You can then get a little closer by taking the bus number 101. By lift, you can reach the 82-metre-high platform. From there, you have an excellent view over Lisbon.

The Elevador de Santa Justa is a passenger lift operated by Carris. Put into service in 1902, it overcomes a height difference of 45 metres. It connects the city centre of Baixa with the upper town of Chiado, as well as the nearby metro station Baixa Chiado. Some escalators allow you to cross the station. At lunchtime it is often quite crowded at the Elevador de Santa Justa, and long queues form at the entrance. However, the viewing platform is also within walking distance. Just pass the tower on the left (a few steps), turn left up the R.do Carmo, take the next right (R.Garrett), and shortly after that, turn right again and follow the Calcada Sacramento to the Archaeological Museum. Pass the museum on the right and cross the bridge to reach the viewing platform. The access itself is subject to charge. However, the view over the city is very worthwhile. 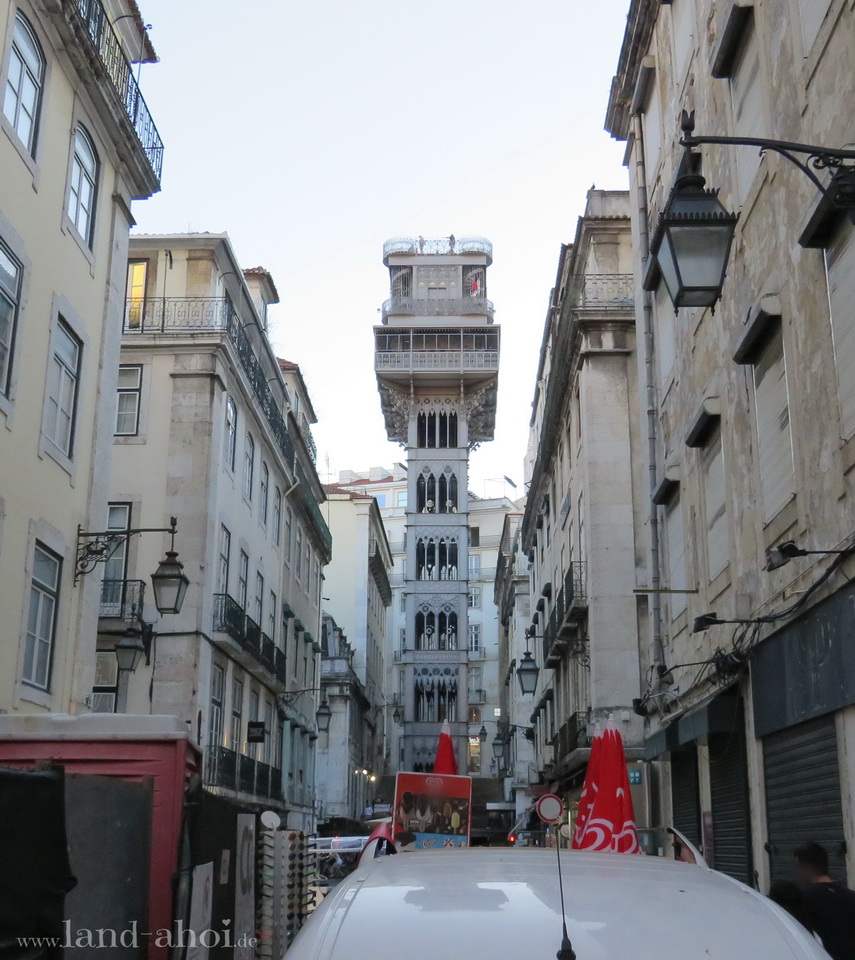 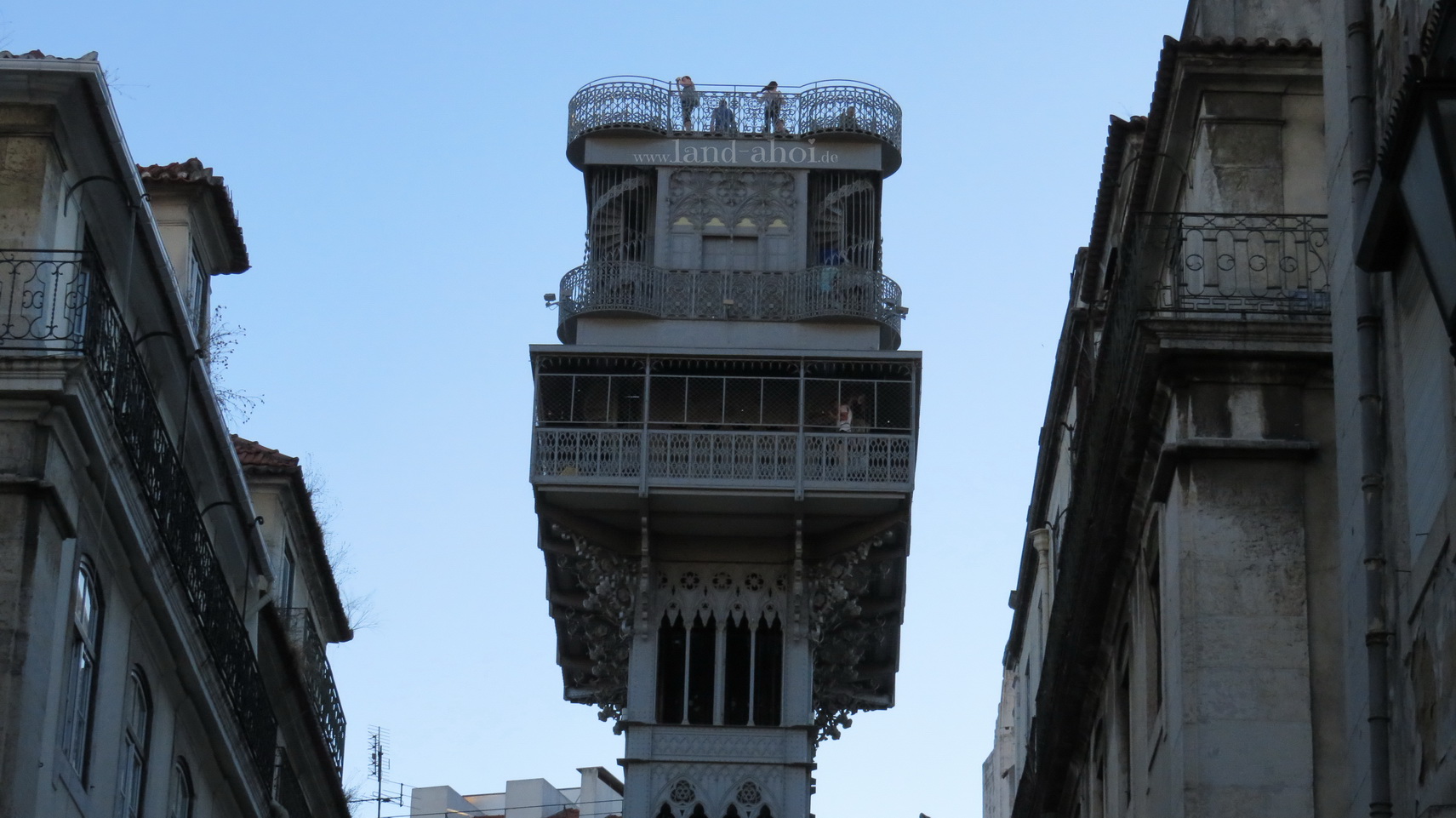 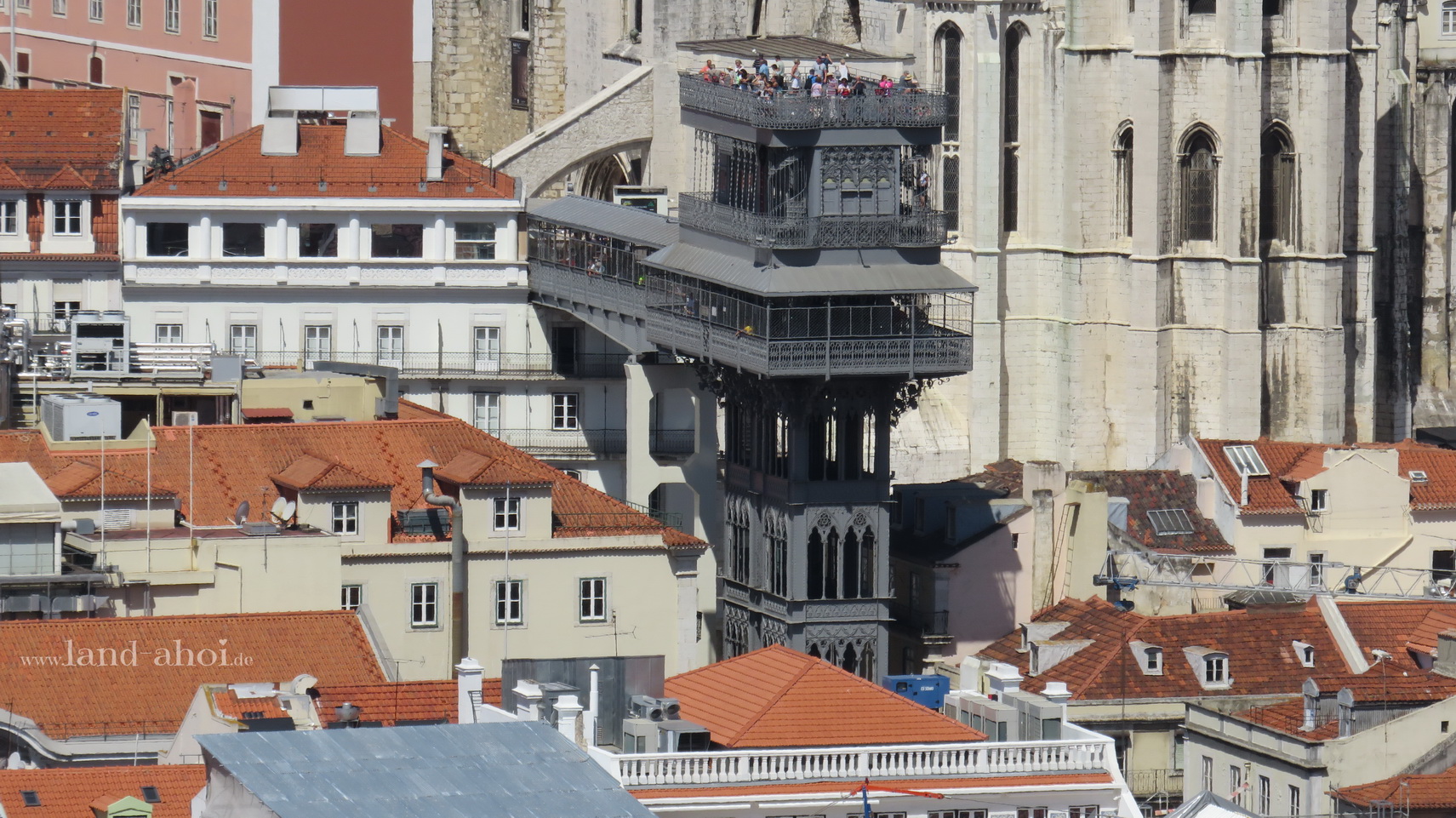 The Torre de Belém is located at the mouth of the Tejo. The former lighthouse is one of Lisbon's most famous landmarks. Completed in 1521, it also served as an arsenal and prison. Its twin tower was destroyed in a great earthquake in 1755. From Praca do Comercio, you can get there by tram line 15E. Get off at the Largo da Princesa stop. Open from 10:00 am.

The Mosteiro dos Jerónimos (Jerónimos Monastery) is located 1200 metres from the Torre de Belém and is also worth visiting. An archaeological museum and a naval museum are located in the side wings of the 300-metre long building. It can also be reached by tram line 15E. It is open from 10:00 am.

You should also visit the high situated Castelo de São Jorge. The historical castle takes up about 6000 m² of space, and impresses among other things also with various viewpoints. These offer excellent views over Lisbon and the adjacent Tejo. A restaurant and café provide for the physical well-being. The integrated museum, which houses interesting excavation finds, is also worth a visit. Admission to the exhibition is free of charge, or is already included in the entrance fee. From the square Praca do Comercio it is about 1000 metres on foot to the entrance on the mountain. By taxi or tuk-tuk, it takes about 10 minutes. The access to the castle is with costs. 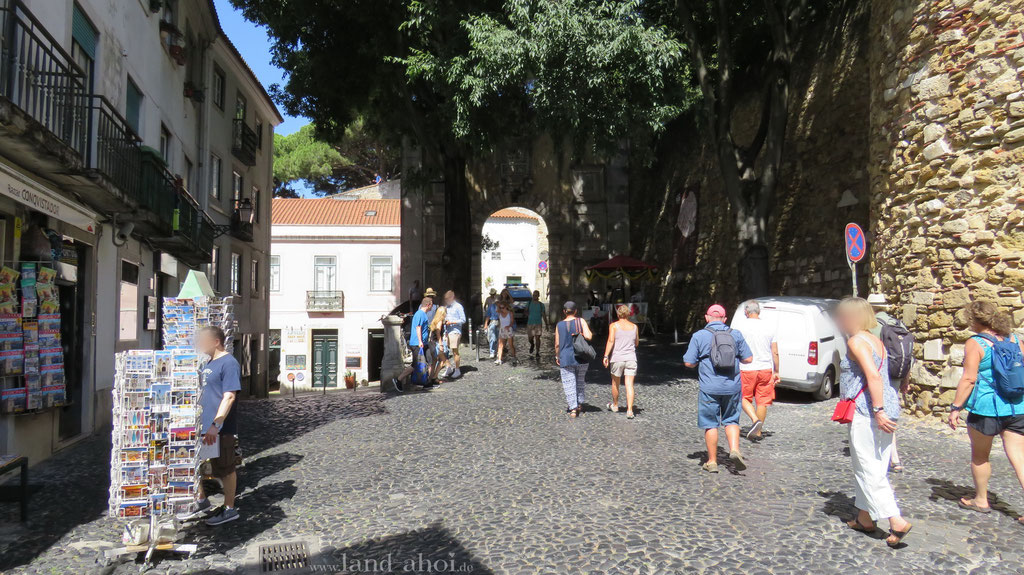 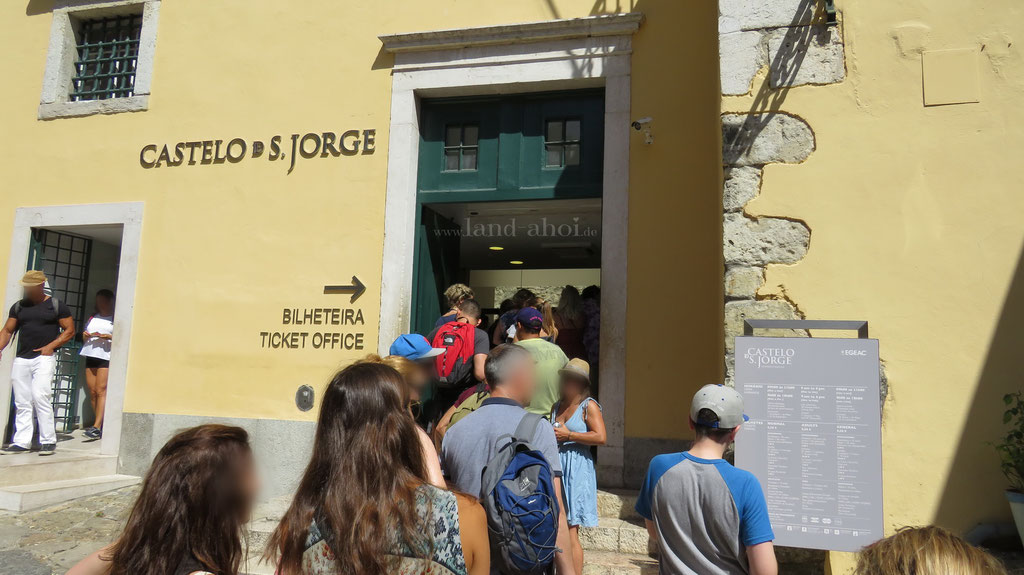 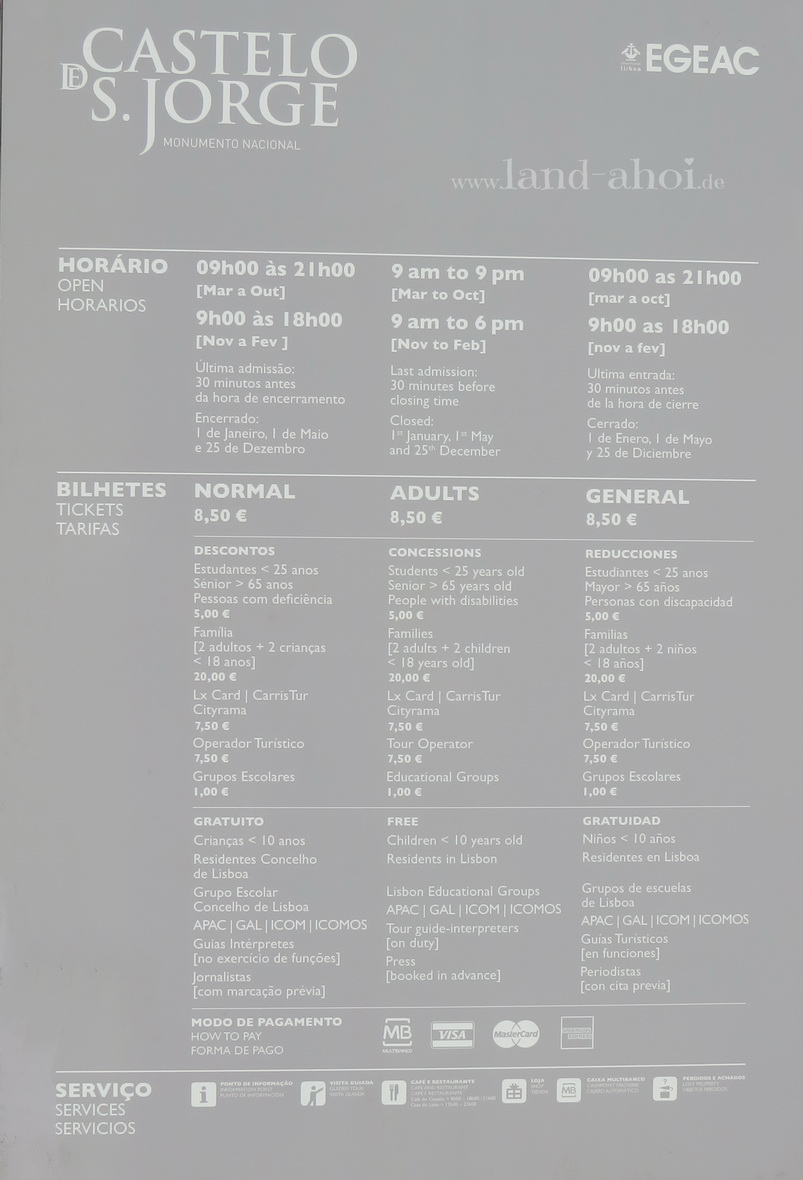 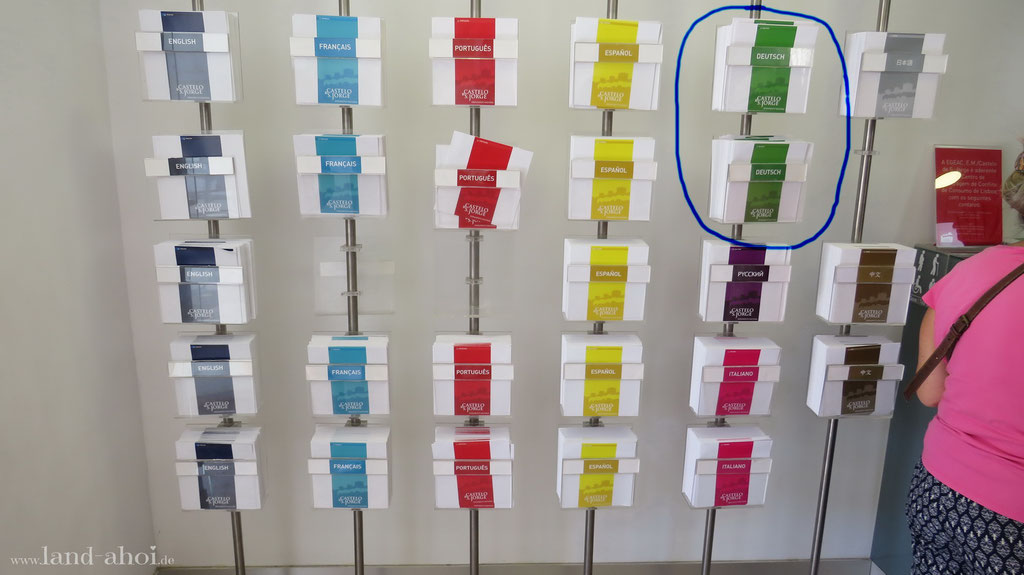 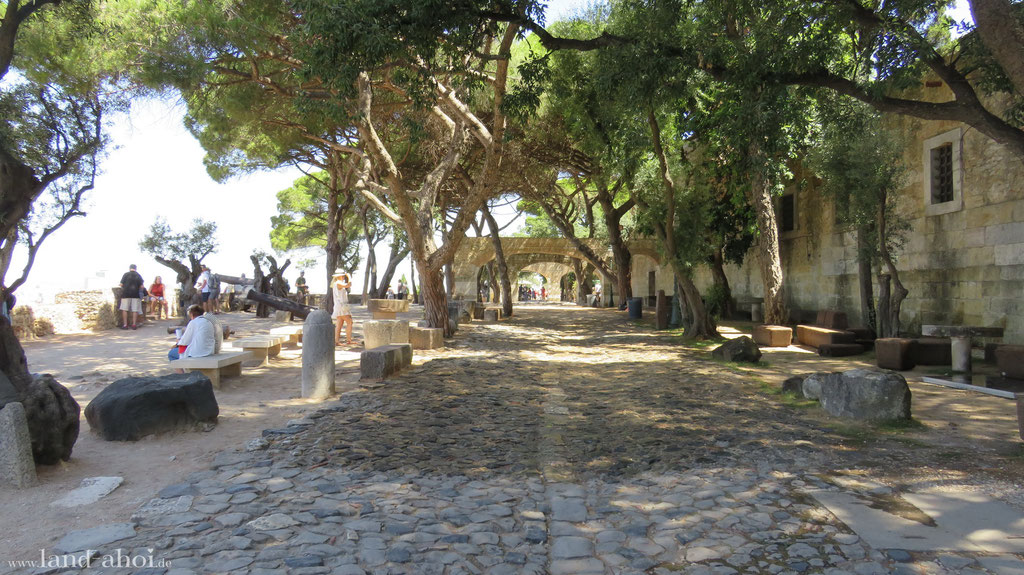 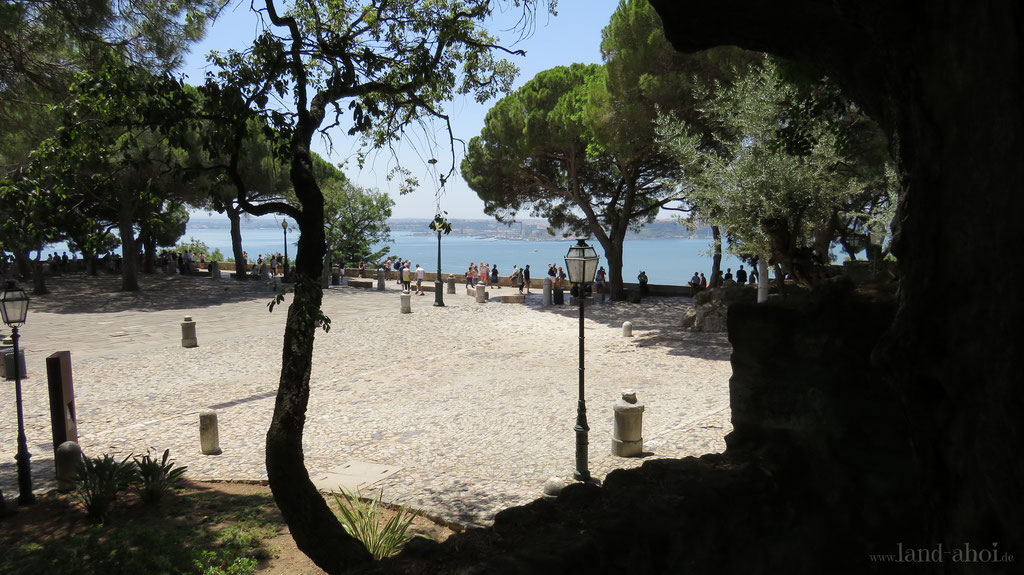 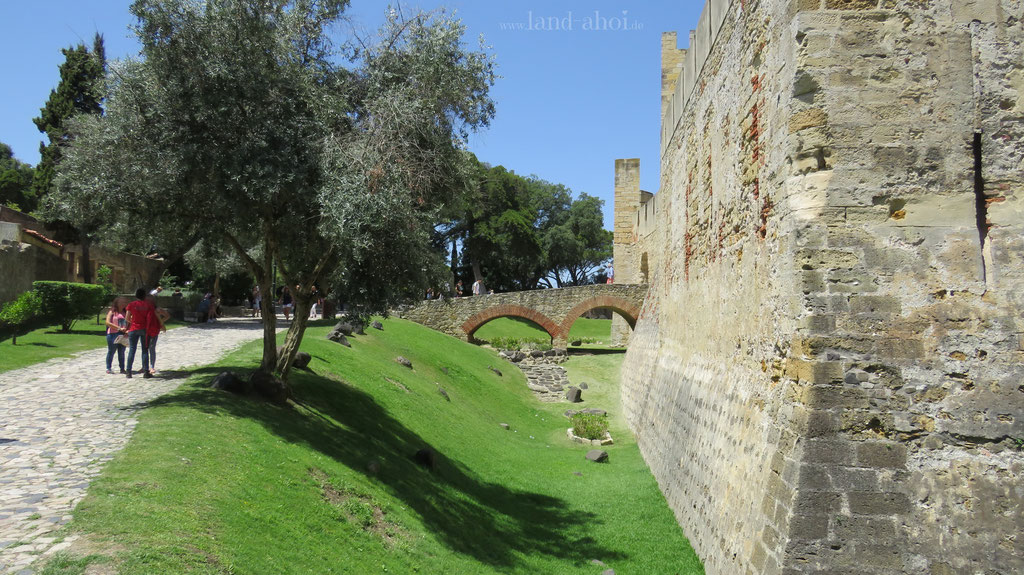 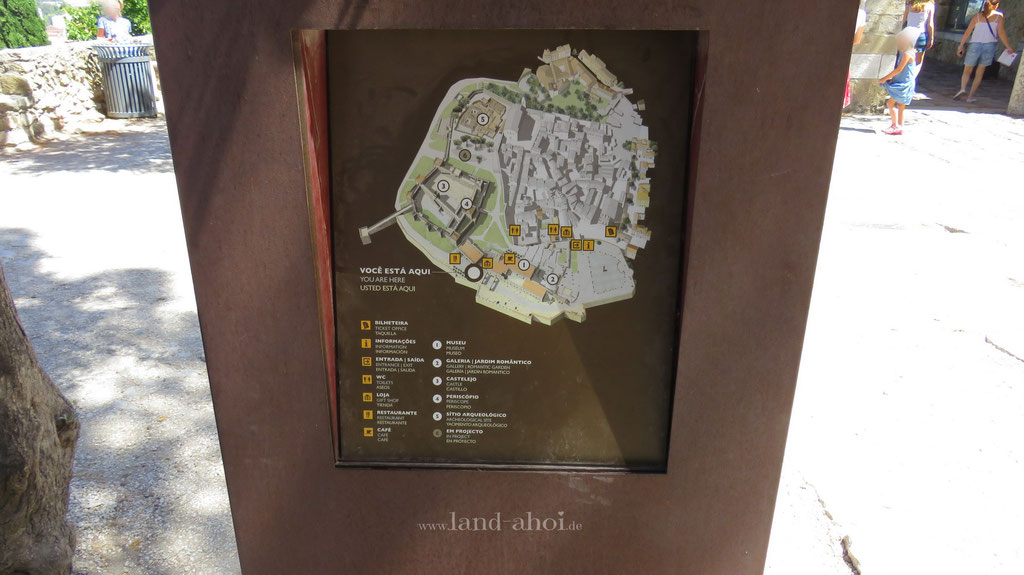 Lisbon's cathedral, Se'de Lisboa, dates back to the 12th century and is only 500 metres from Praca do Comercio, making it very easy to reach.

Shopping is very good in the centre of Baixa, north of Praca do Comercio. Rua Augusta is the central shopping street. It begins directly behind the triumphal arch Arco da Rua Augusta. In addition, there are several large department warehouses in Lisbon that house a variety of shops. For example, the blue metro line (azul) takes you to the Colombo Shopping Centre (Colégio Militar/Luz stop), the Armazéns do Chiado Shopping Centre (Baixa/Chiado stop) and the El Corte Ingles department shop (São Sebastião stop). The department shops are usually open daily until 22:00 or longer.

Lisbon has several stations from which long-distance trains depart in various directions. Most of them are connected to the metro network. From Cais do Sodre station, the train runs towards Estoril and Cascais (30 minutes journey). From Rossio station, take the direction of Sintra. Oriente station serves the south (Algarve).

The Tuk-Tuk's have become an integral part of Lisbon road transport. At almost every corner, the drivers of the autorickshaws offer their services. The prices for individual rides are negotiable with some skill.

Through the tour and excursion providers GetYourGuide, Meine Landausflüge and Viator, you can book various excursions, activities, tours, tickets and admission tickets in Lisbon, which are often offered at much lower prices than comparable excursions offered by the shipping companies. Thus, if you book well in advance, a large number of excursions can be organised on your own.

A small pre-selection of independent tour operators offering excursions for, in and around Lisbon,

we have compiled for you here.

If you have not yet booked a Western Europe Cruise, but would like to get to know Lisbon personally and go on your own excursions, you will find great offers from the major cruise operators in the German-speaking world. Aida, Costa and Tui Cruises - Mein Schiff** offer attractive routes on their modern cruise ships, along with other interesting destinations. Book your next dream holiday directly with your favourite shipping company at fair conditions.

All ocean and river cruises can also be booked conveniently and inexpensively online with the cruise specialist Kreuzfahrten-Zentrale Astoria. This means that you can choose from a wide range of up-to-date offers from various shipping companies. These include AIDA Cruises, Carnival, Celebrity Cruises, Costa Cruises, Cunard, Holland America Line, MSC Cruises, Norwegian Cruise Line, Royal Caribbean and TUI Cruises. Also attractive are the popular special offers, which allow you to travel at very reasonable prices and possibly even get a great bargain. 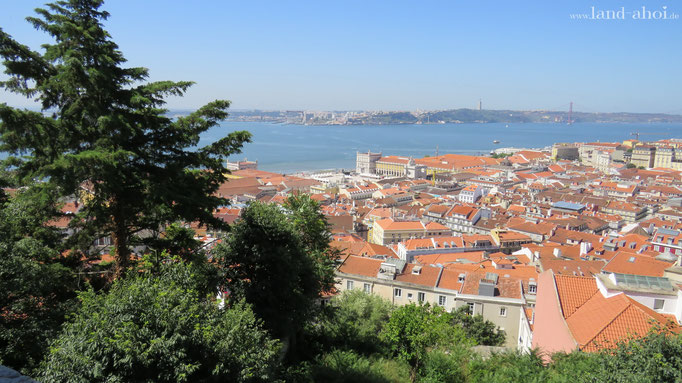 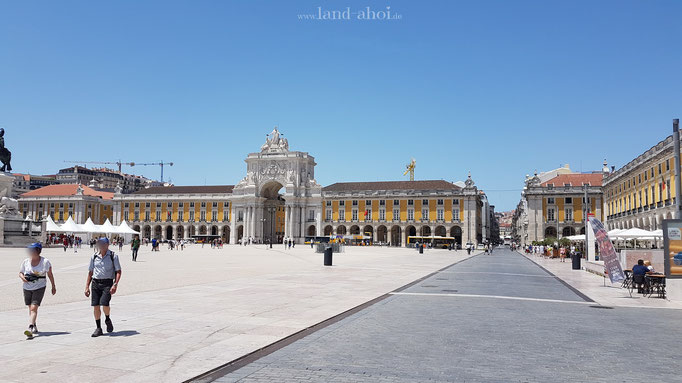 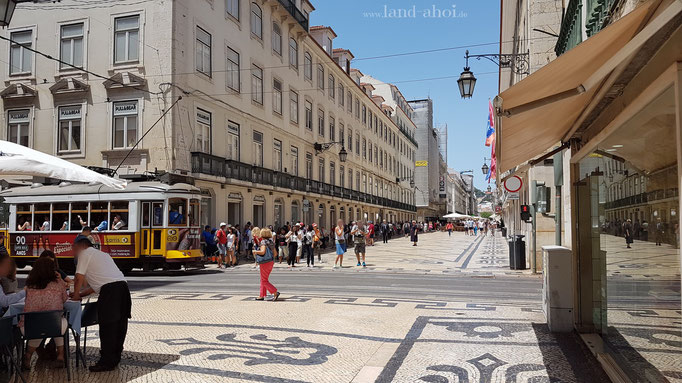 - Opening hours of the museums: Tuesday to Sunday from 10:00-17:00. Partially closed during lunchtime.

- Bus and tram timetables: Lisbon public transport Lines with an "E" after the number are trams.