Sights and ideas for your own excursion along the French coast

- Port shuttle: Chargeable shuttle buses go to the city, near the town hall (Hotel de ville) and to the Docks Vauban shopping centre.

- Taxis: usually available at the pier

- Buses: the bus station is located right next to the main station on Rue Geffray. There are several bus companies. 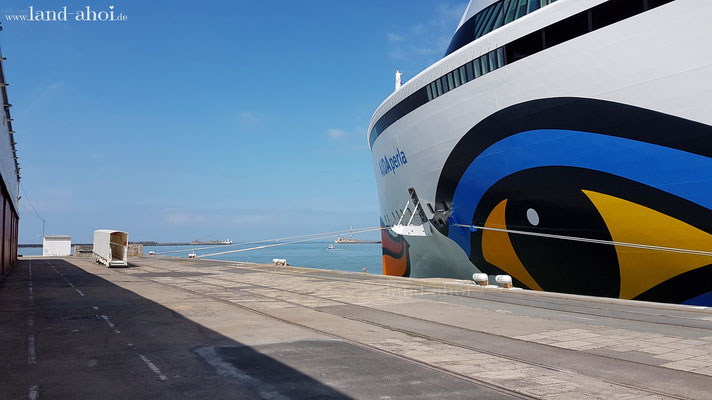 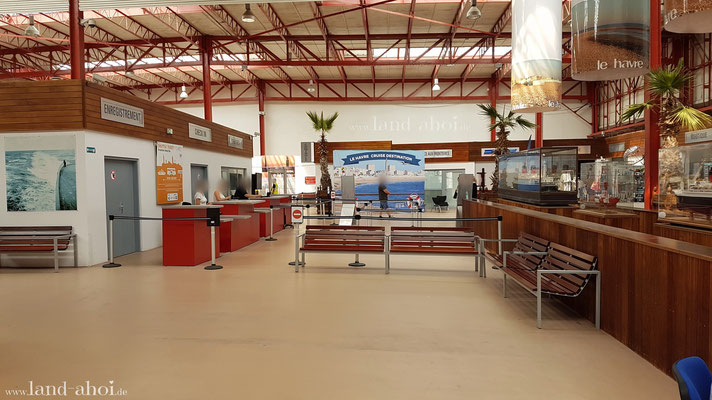 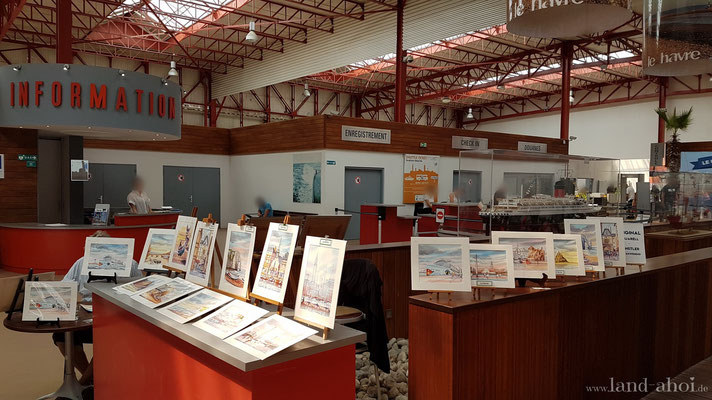 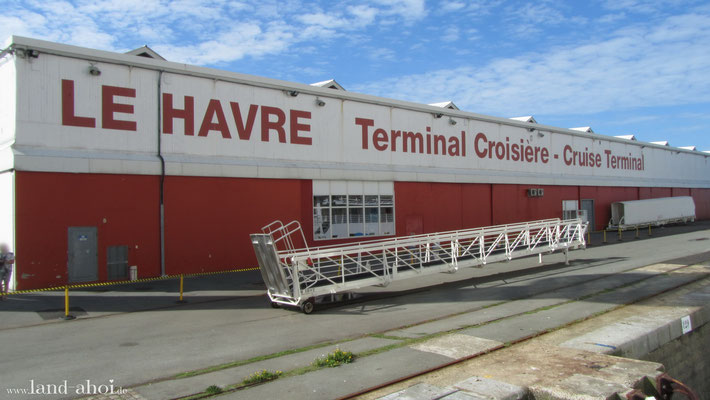 The piers of the cruise ships are located in the south of Le Havre, almost directly at the mouth of the Seine. The cruise terminal there, accommodates an information stand, where one gets free bus schedules and city maps. Wlan is available free of charge. There is also a bike rental and a small café. Free shuttle buses run into the city, stopping between the town hall and the Le Volcan cultural centre. A second stop is made at the Docks Vauban shopping centre. The city centre, with its numerous shops and restaurants, is about 25-30 minutes away on foot. The route is signposted and is approximately 2.5 kilometres. The distances to the local train and bus station are almost identical. However, a trip to Paris should be well considered. Due to the long journey time of about 2.5-3 hours in each direction, and the associated short stay in the state capital, this detour is only worthwhile to a limited extent.

Shuttle buses are operated by the local authorities for a fee. The tickets are issued in the form of day tickets, are also valid as public transport tickets, and cost 4 euros per person. From the first stop at the town hall, there are further connections by bus and tram. A second stop of the harbour shuttle is at the shopping centre Docks Vauban, before returning to the cruise ship in the direction of the berth.

The Omaha Beach is located in the immediate vicinity of the small village of Saint-Laurent-sur-Mer. Ideally, you should take a rental car for the approximately 150 kilometres, and you should allow around 90 minutes driving time for one direction. Near the neighbouring village of Colleville-sur-Mer, you can visit the American military cemetery, memorial and information centre. Open daily from 09:00-17:00. 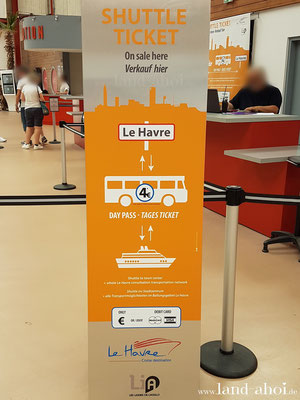 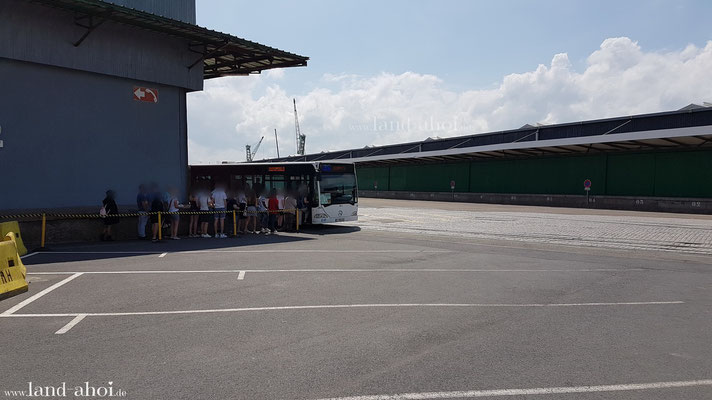 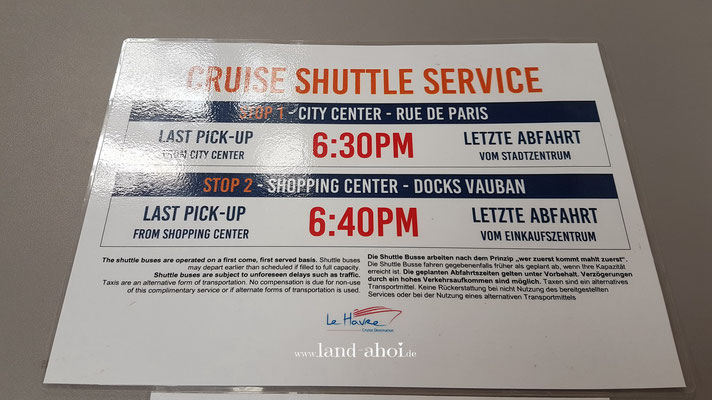 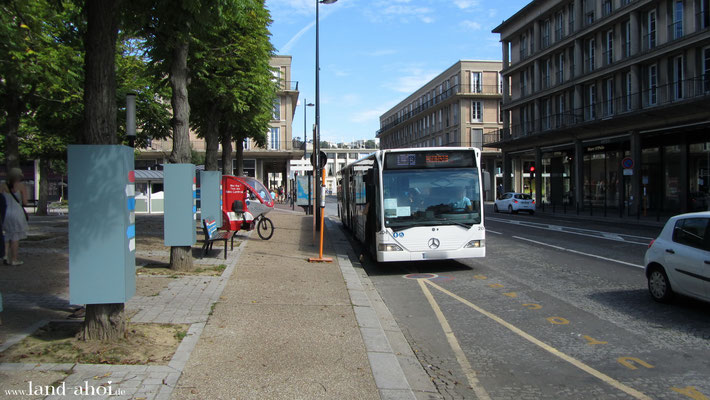 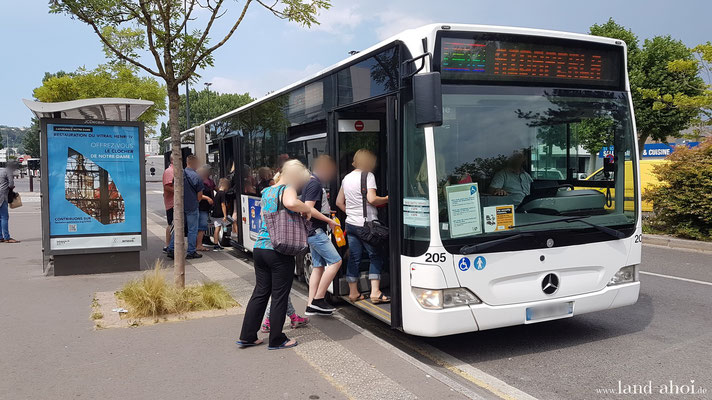 A little further east, in Longues-Sur-Mer is the only remaining coastal battery. Four 150 mm cannons, lined up in a row, can be seen there near the coast. The nearby fire control bunker is also accessible.

On the other side of the Seine is the former fishing village of Honfleur. This small town is a popular destination for many cruise guests and therefore often seems to be overcrowded. From the bus station, Platform D, lines 20 and 50 of the bus company "Bus Verts" go to Honfleur. But both lines do not have the same stop at the long bus station, platform D, in Le Havre. One gets the bus tickets in the small houses with the inscription "Bus Océane". An alternative taxi to Honfleur is quite expensive and costs approximately 130 euros for the return trip.

Link to the bus timetables:

The public bus no. 24 (departure times 09:30 and 10:30 from the bus station) takes you to Etretat in one hour. The little village Etretat is a small seaside resort, which is located north of Le Havre. High cliffs worth seeing surround the cosy village with its pebble beach. Please note that it is forbidden to take pebbles with you. From the beach you can also reach the peaks of the adjacent cliffs via well-developed paths and, weather permitting, enjoy a great view from there.

Approximately 500 metres from the city centre, respectively 10 minutes from the first stop of the shuttle bus, or 3 kilometres from the landing stage, there is a pebble and sand beach of approximately 2 kilometres length with a promenade. There, beside the wide cycle path, there are also some small shops, cafés and bars.

From the beach (Porte Oceane), near the skate park, the two lines of the tram, which will be in operation in 2012, also start. The route of both lines is completely identical up to Place Jenner. There, the route splits and goes once to Grand Hameau (northwest, near the airport) and in the other direction, to Cacriauville Pré-Fleuri in the eastern part of Le Havre. A funicular runs between the Place Thiers square in the city centre and the Rue Félix Faure, 77 metres higher. It runs daily, except Sundays, from 7:30-19:30. Route map of the tramway and funicular: 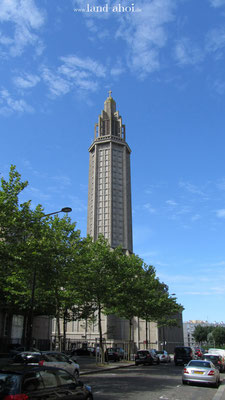 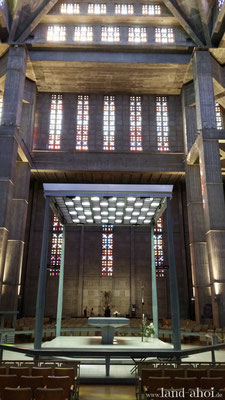 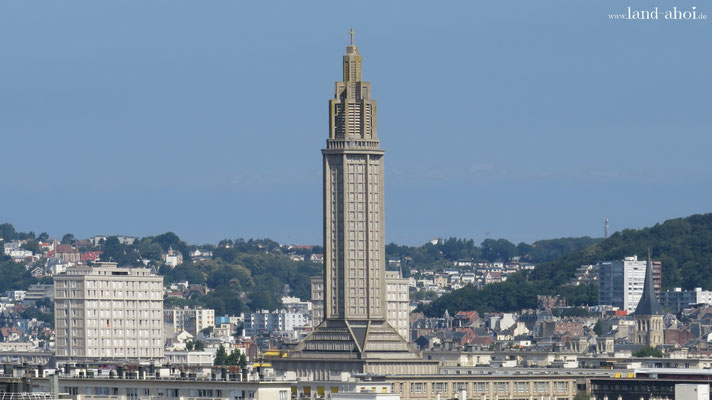 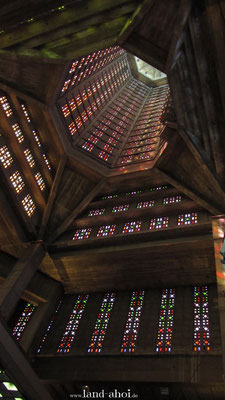 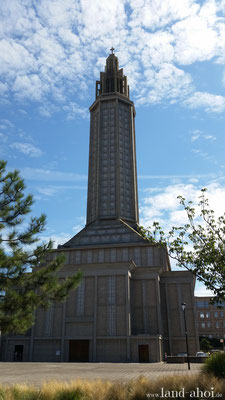 The Church of Eglise St-Joseph, at the Bd. Francois 1, is a catholic parish church, which was built in the post-war period. It also serves as a memorial to the victims of the liberation of France in 1944. The concrete tower, 107 metres high and hollowed out by coloured glass blocks, can be easily seen from afar and dominates the cityscape. The building was erected in the years 1951-1957. Inside there are churches untypical upholstered folding chairs, on which you can enjoy an impressive play of colours in the sunshine. Despite, or maybe because of the concrete construction, this building is very worth seeing.

The Cathédrale Notre-Dame on Rue de Paris is a very old church from the 16th century. It was, like Le Havre itself, badly damaged during the 2nd World War, after which it was restored until 1974. From the outside, the appearance is less imposing, but inside it captivates with its arcades and beautiful, coloured ornamental windows.

The massive Town Hall, also called Hotel de Ville, was designed by Auguste Perret and completed in 1957. It stands on the north side of Europe's largest town hall square, and is dominated by its 72-metre high tower. The extensive town hall square is crossed by the local trams, which also stop there at the station. In the southern part of the square, some water features have been integrated. 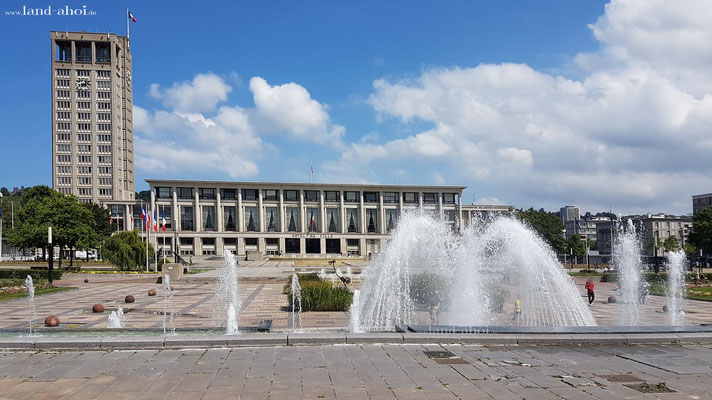 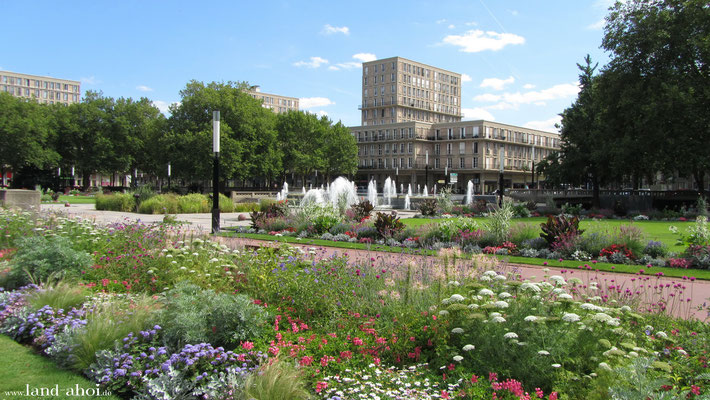 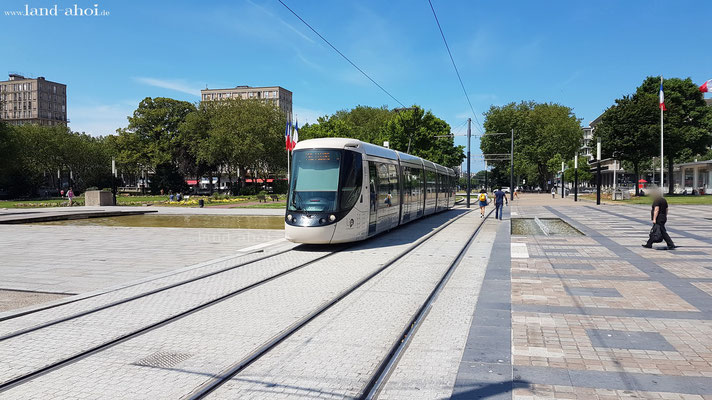 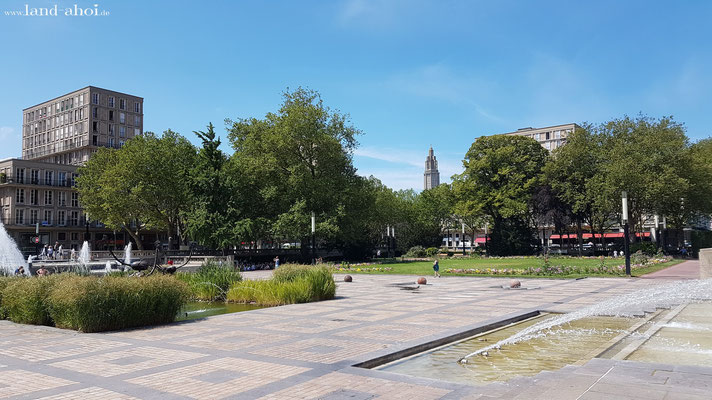 The Museum of Fine Arts presents interesting works which date back from the 16th to the 21st century. Colloquially known simply as MuMa, or Museum Malraux, the Musée des Beaux-Arts André Malraux was opened in 1961, and today houses one of the most important collections of Impressionist painting.  It is located at the Boulevard Clemenceau, 2, has an integrated café-restaurant and is open daily, except Mondays, from 11:00-18:00. On weekends it closes one hour later at 19:00.

Les Bains des Docks, opened in 2008, is a bathing complex covering an area of around 5000 square metres, with an outdoor heated 50-metre sports pool and slide. From the outside, the building appears rather plain and unspectacularly constructed. The interior, however, is the complete opposite. Here, a lot of value was attached to a bright, modern and partly futuristic design. The swimming pool is located at the Quai de la Réunion and is opened daily from 10:00 to 20:00 o'clock. On Friday, it closes two hours later, at 22:00 hrs.

The largest cable-stayed bridge in Europe, the Pont de Normandie with a span of 856 metres, was built between 1988 and 1994. It crosses the wide mouth of the Seine and connects Le Havre with the charming former fishing village of Honfleur. There is a charge for its use.

In the middle of the city centre, there are buildings that do not really fit into the cityscape. Le Volcan, the cultural centre includes two impressive buildings, in which during the whole year, different events are accomplished. In the higher one, there is a theatre and a cinema, the other one mainly serves as a concert hall.

The shipowner's house, Maison de l'Armateur is considered the most important museum in the city's history. Here, one encounters architecture from the 18th century. The building has a central atrium and is located in the Quai de l'lle street, number 3. It is open daily, except Tuesdays, from 10:30-12:30 and from 13:45-17:00. From April to October it closes half an hour later. The entrance fee is 7 euros per person. 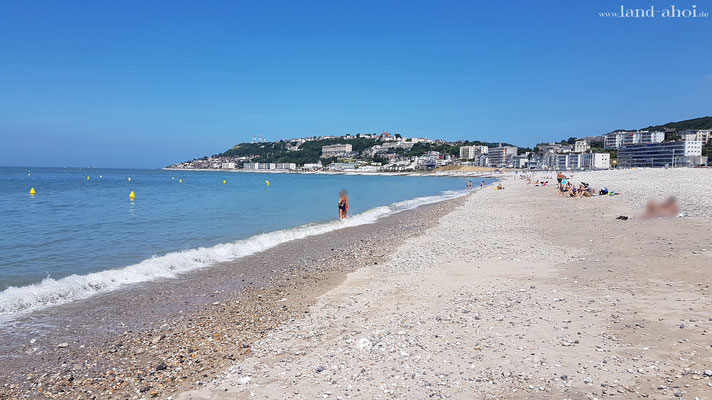 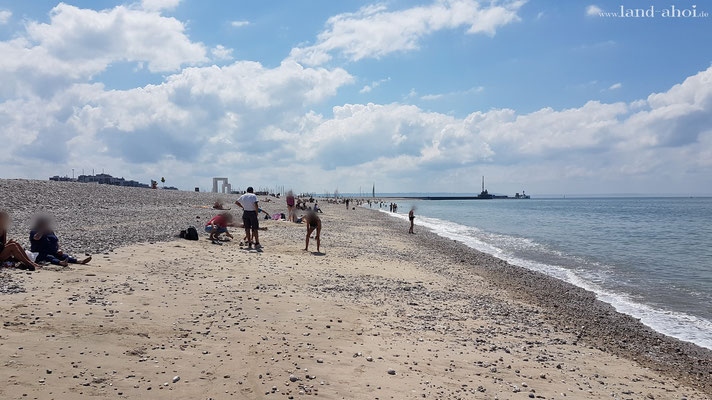 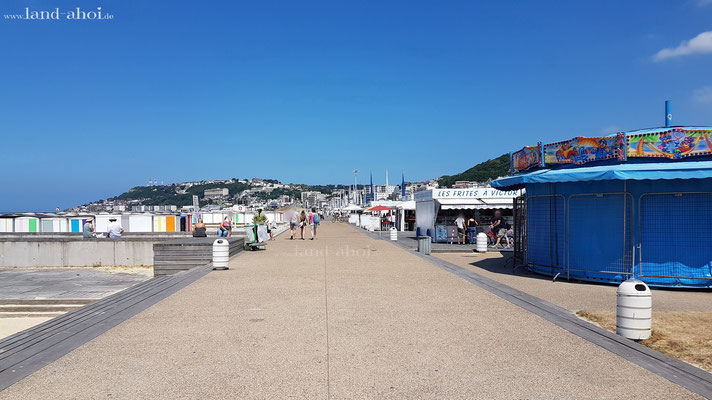 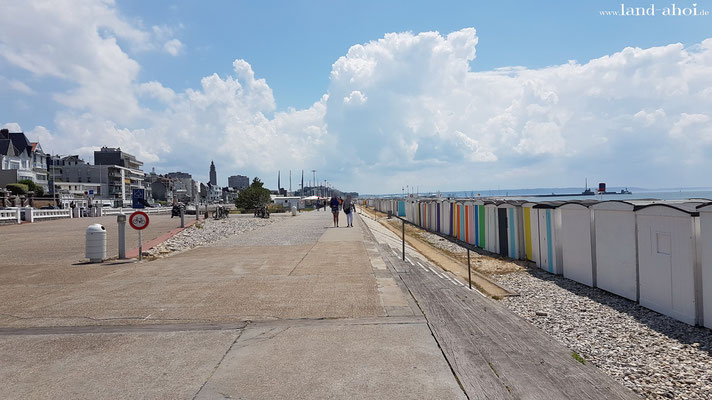 Founded in 1881, the Muséum d'Histoire Naturelle presents a palaeontological and zoological collection as well as drawings by the naturalist Charles Alexandre Lesueur. It is located in the former courthouse on Place du Vieux Marché. It is open Tuesday to Sunday from 10:00-12:00 and from 14:00-18:00. The entrance fee is 5 euros per person. For persons under 26 years of age, the entrance fee is 3 euros each.

Through the tour and excursion providers GetYourGuide, Meine Landausflüge and Viator, you can book various excursions, activities, tours, tickets and admission tickets in Le Havre, which are often offered at much lower prices than comparable excursions offered by the shipping companies. Thus, if you book well in advance, a large number of excursions can be arranged on your own.

for, in and around Le Havre,
we have compiled for you here.

If you have not yet booked a cruise in Western Europe, but would like to get to know Le Havre personally and make excursions on your own, you will find great offers from the major cruise operators in the German-speaking world. Aida, Costa and Tui Cruises - Mein Schiff offer attractive routes with their modern cruise ships, together with other interesting destinations. Book your next dream holiday directly with your favourite shipping company at fair conditions.

All ocean and river cruises can also be booked conveniently and inexpensively online with the sea travel specialist  Kreuzfahrten-Zentrale Astoria. This means that you can choose from a wide range of up-to-date offers from various shipping companies. These include AIDA Cruises, Carnival, Celebrity Cruises, Costa Cruises, Cunard, Holland America Line, MSC Cruises, Norwegian Cruise Line, Royal Caribbean and TUI Cruises. Also attractive are the popular special offers, with which one can travel at a particularly low price and possibly also get a great bargain. 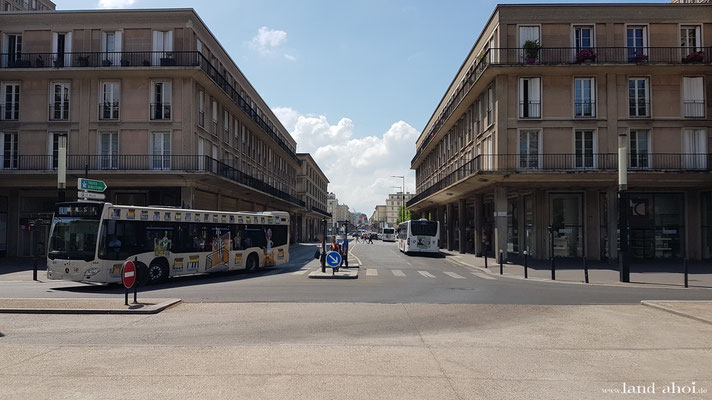 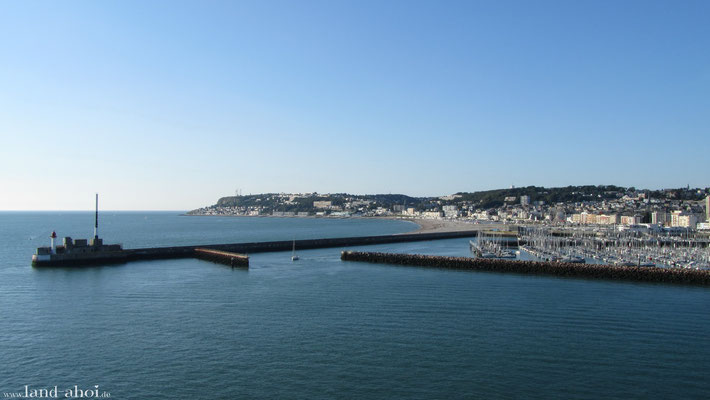 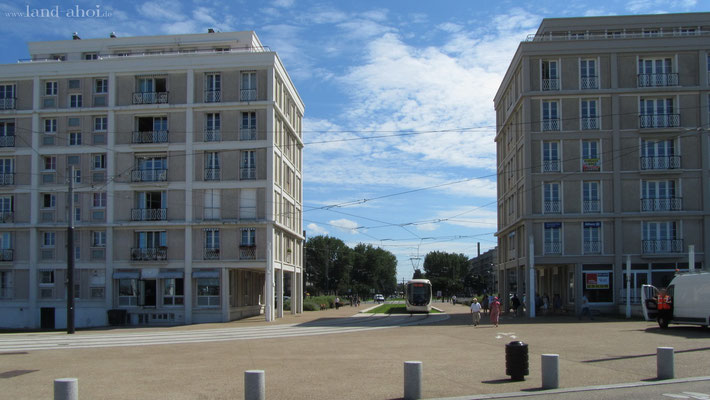 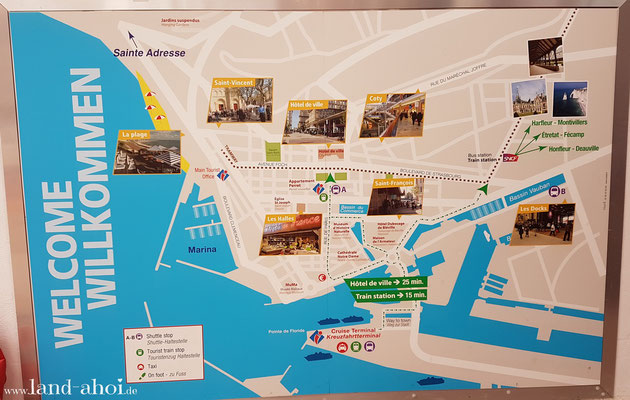 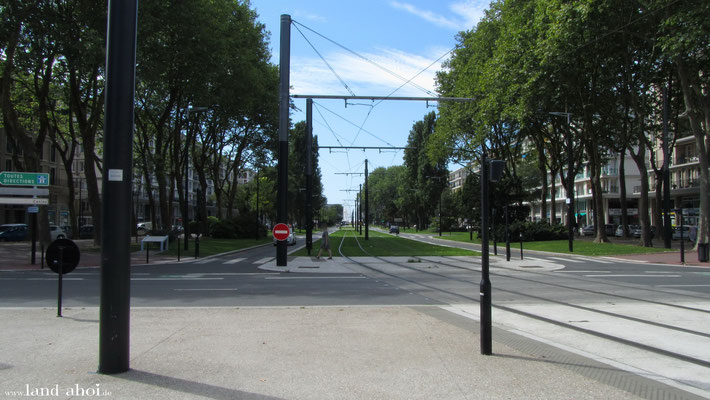 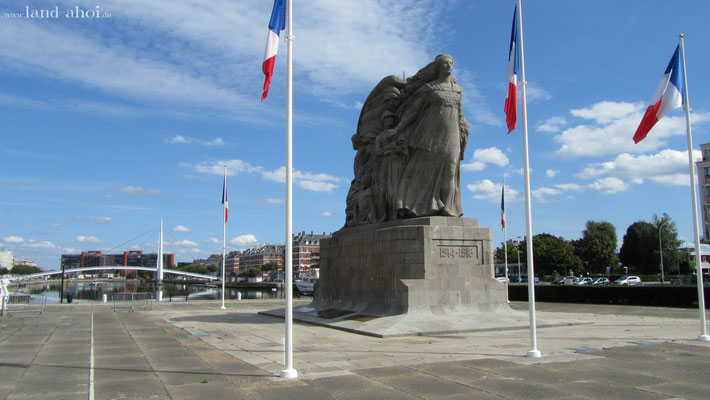 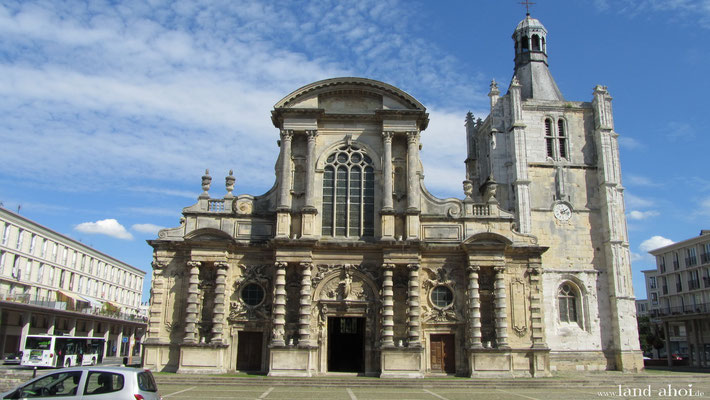 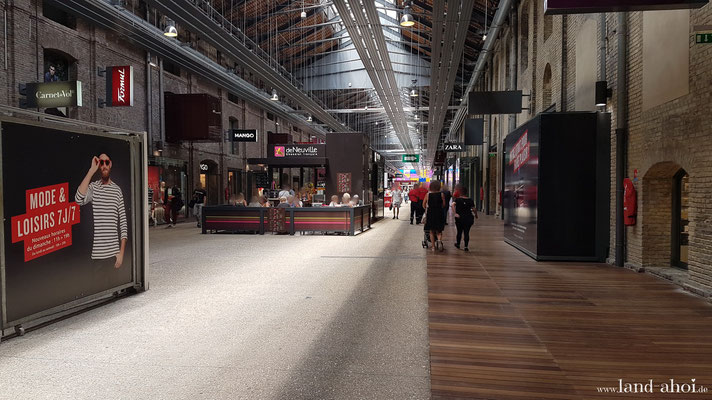